Please find us at Meanderingjoy.com
Posted by Unknown at 9:13 AM No comments:

Sometimes wonderful events happen in life that create much activity and require changing one's activities and priorities.   We had such an event when our oldest daughter became engaged in July.  I dropped out of the blogosphere to work the wedding plans.  I have been too busy to write--or I have lacked the discipline to write--probably a little bit of both.  As life will also have it, there are times when we are forced to slow down.  That time for me came on Thursday.   I had hip replacement surgery and now am forced to slow down--more on that in a later post.

So here is the story of Katy & Matt's engagement.

Matt, Katy's fiance, talked with Steve and I back in May and asked our permission to marry Katy. We, obviously, said yes.  The proposal was to be a surprise on June 30.  It is tough to keep a secret for 6 weeks.  Turns out--Steve and I were better at it than Matt.  He was very excited.

Before the proposal came about we had several activities:  Lainey's Graduation from college, moving Meandering Joy from St. Petersburg, Florida to St. Simons, Georgia and home to take care of multiple business and family commitments at home.

The final plan for the engagement was set.  We (Steve, Joy & Lainey) were to get Katy to our house so that Matt could surprise her with a ring at the dock on the pond in our back yard.  After we were sure she was on her way, we headed to Katy's house loaded with food for a surprise engagement party to which Matt had invited several of her closest friends.

We lured Katy to the house with the promise of a free meal at our local Mexican restaurant--El Real. She loves this place.  She was  a little perturbed with Matt for not being able to come down for a visit before all of us going to the lake house for the July 4 weekend, so Mexican food was a good way to get her through the disappointment.

We blocked all the entrances to the house to force her to walk around the house toward the back where we had told her to meet us at the screen porch.  Matt was to surprise her there.  Unfortunately, Katy took the path of least resistance and shimmied around the truck which was blocking the walkway to the screen porch.  Matt couldn't believe she did this--she tottered on about a 1/2 inch of the walkway.

When she sees him, she is not amused.  She first asks "Where is my family", then she called him names for lying to her about not being able to come down early.  He calmed her down and walked her to the dock. I am not sure if it had dawned on her or not about what was happening.  Anyway--he asked, she said yes, and it was official, they were engaged.

We did not anticipate she would FaceTime us while we were setting up the food at her place.  We ignored that call.  We returned it outside.  I am sure Katy figured out that we would be at her house when they arrived under the ruse to get cleaned up for the supposed private dinner with just the two of them.  She was happy to see us though and didn't let on that she knew.

Through out the evening several friends arrived and we celebrated until about 1:00 that night.  A very late night for Joy & Steve indeed.  Many of the friends who came to the party, joined us for the long July 4 weekend.

Katy's initial plans were for an October 2016 (12 week away) wedding at our house, outside. Following the wedding, her plan was that all Matt & Katy's friends would camp out and celebrate all night.  I had visions of Woodstock or Lolla-POOLE-looza dancing around in my head.

We and her friends tossed around those ideas and more over the July 4 weekend.  Important lesson--never take wedding advice from your kids friends.   Woodstock and Lolla-POOLE-looza were mild to their ideas for a Poole/Jeffery wedding.

The final decision is a January 14 at our home for immediate family and a big party for friends and family on March 18.  Now that we have a date, Steve and I have gone into high gear getting the house and yard into shape after ignoring both since we took up the cruising life.  Hence--the lull in my writing.

Our travels to New Smyrna Beach took us through the Indian River past Cocoa Beach, Merritt Island and Titusville.  We could see Kennedy Space Center and Cape Canaveral in the distance.   At the north end of Merritt Island we passed through the Haulover Canal to enter the Mosquito Lagoon.  The canal is full of manatees.

The remainder of the day was spent in  the NO WAKE ZONE.  It was a slow day of travel to get to New Smyrna Beach City Marina.  Charlene and I took off to explore the shops. Unfortunately for us, most were closing when we arrived.  We came away empty handed. However, we found this little Airstream cooler for our friends who just bought an Airstream. 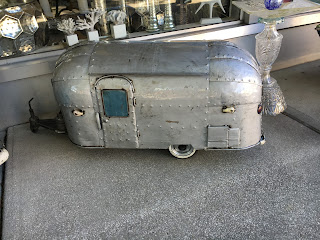 Dinner at the CorkScrew Bar & Grille was delicious.  We were joined by a sweet couple who knew Dave & Charlene when he worked in Lawrenceville. 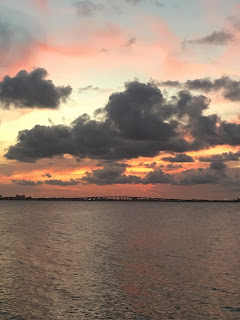 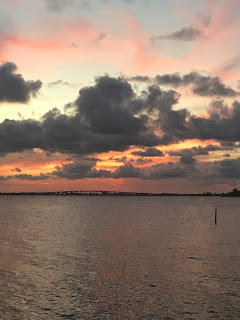 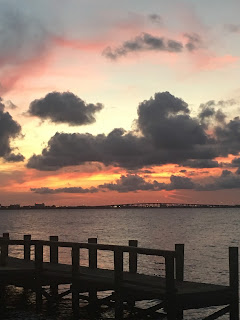 Stuart to Melbourne or "Where is the Dinghy?"

The trip from Stuart to Melbourne took us through Jensen Beach, Indian River Estates, Fort Pierce, Vero Beach, Wabasso and Sebastian and Malabar.  Fort Pierce is the most industrial of these towns along the ICW.   Vero Beach is a beautiful area with expansive estate homes along the waterway.  It was a delight to show Dave & Charlene some of our favorite sites along the way.

The anchorage at Melbourne Beach is a great stop.  Since discovering this nice little town, we stop here rather than staying at the marina although the marina is great alternative when we want to be hooked to shore power.    We anchor at the little green 2 below.  The Marina is at the red 5.

The first order of business at the anchorage is to take Piper to shore.  Steve usually  always takes care of this while I stay aboard and make sure the anchor holds.  We aren't terribly worried about the anchor holding, I just have a thing about watching it for an hour before I leave.  Every time we leave in the dinghy and MJ gets out of our sight we are always relieved that she is still there when we return.   Dave joined Steve and Piper for the walk while Charlene and I made out a grocery list.  When they returned, we spent some time on the bow and on the fly bridge to admire the view and discuss plans for the afternoon.

Steve spotted the dinghy about a quarter mile away.  Not sure if that is accurate, but he swam for it, so he gets to determine the distance.   He scurried down to the state room to put on  swim trunks, flew back up through the salon and dove off the swim platform.  The swim trunks slipped down to his --yep you got it--  he stopped briefly to make an adjustment and then swam like he was in the Olympics.   I watched--speechless.   I wasn't aware at the time that Steve had seen a sign warning of bull sharks in the area. You might be asking "How did this happen?'  HMMMM.  Let's just say that the dinghy did not get tied off in the most secure fashion and a lesson on tying knots ensued.

After this little adventure, we were all ready to go exploring! 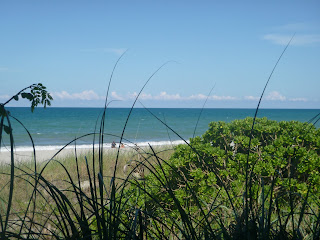 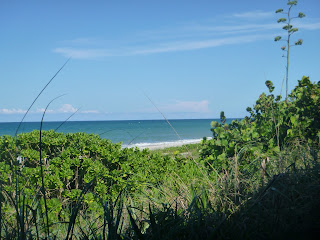 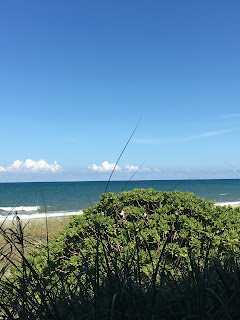 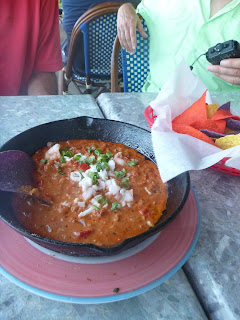 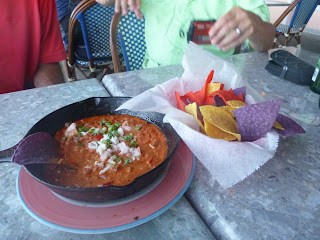 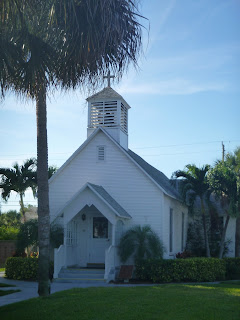 Crossing Lake Okeechobee is not difficult but one must stay in the channel or risk running aground. Lake Okeechobee is also known as Florida's Inland Sea, The Big O or The Lake by locals.  It is the largest freshwater lake in Florida and covers 730 square miles.  It is about half the size of the state of Rhode Island.

The name of the lake is derived from Hitchiti words oki meaning water and chubi which means big.  Yes,  it is some big water.  Big, Boring Water.  Not much to see on our trip to Stuart. 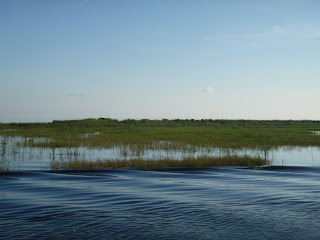 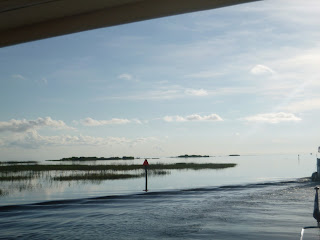 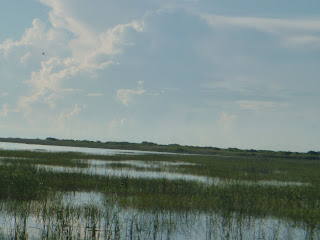 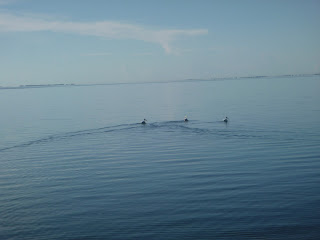 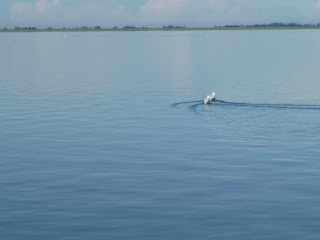 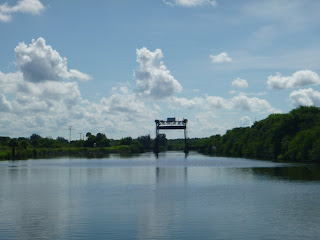 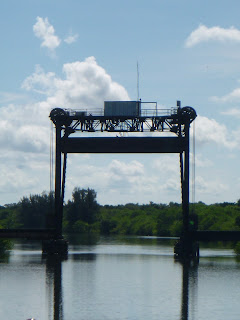 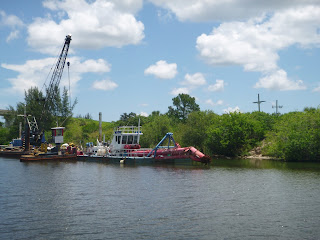 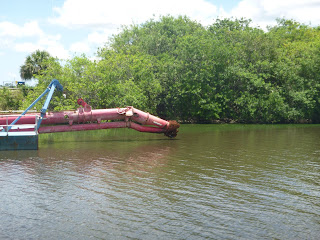 In Stuart we pulled into the Mariner Cay Marina.  We spent most of March and April here.  Steve took the boat straight to the transient dock with no worries.  Charlene and I spent the rest of the afternoon in the pool while Dave and Steve grilled venison sliders for dinner.   After the sun went down and gave us some relief from the heat, we took a walk through this beautiful neighborhood.

Posted by Unknown at 6:30 AM No comments:

Steve and I have different ideas when it comes to identifying a marina as a resort.  I immediately think of places like South Seas Plantation on Captiva Island or the Vinoy Renaissance in St. Petersburg or the Pink Shell in Fort Myers.  Steve thinks of Roland & Mary Ann Martin's  Marina & Resort in Clewiston.

Roland and his wife Mary Ann bought the fishing shack marina and some vacant property in 1981 with the idea to build the best bass fishing destination on Lake Okeechobee. Today the resort includes motels, condos, a restaurant with Tiki bar & grill, a marina store, a tackle store, airboat rides, marine service center and an RV park along with their professional fishing guide service.  This place is a bass fisherman's paradise.  Even the Christmas decorations (which are still up) feature bass! 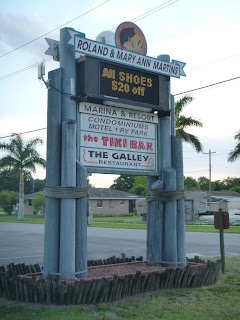 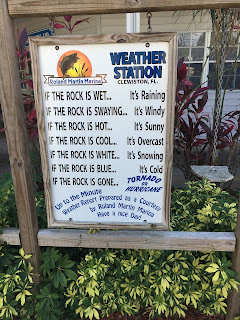 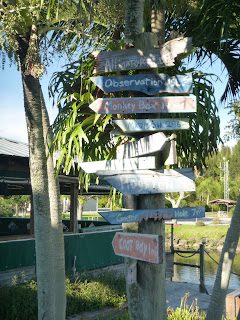 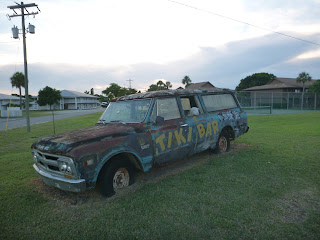 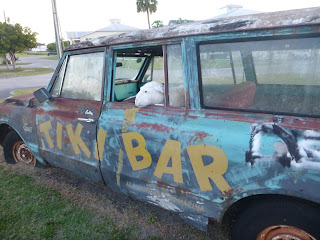 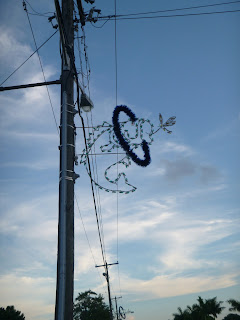 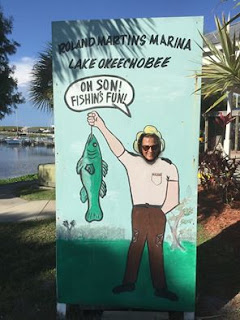 Resort:  (noun) a place that is a popular destination for vacations or recreation or frequented for a particular purpose.

Map of our travels